Based on the properties of the model of an elementary cube
https://liusheng.su/2021/09/09/chinese-philosophy-as-a-reflection-of-descartes-physics/
where we have found the place of each acupuncture meridian let’s reconstruct the trajectory of movement of the impulse of vibrational life energy during the day.

We select the Pericardium meridian – PC – as the beginning of the cycle (in TCM this is the Heart meridian – the reasons for this difference are shown in the article “Elements of Life”
https://www.researchgate.net/publication/309956054_The_Elements_of_life).

In addition, the Pericardium is located at the very beginning, as far as it has the lowest vibration frequency in comparison with other elements in the matrix of DNA bases. 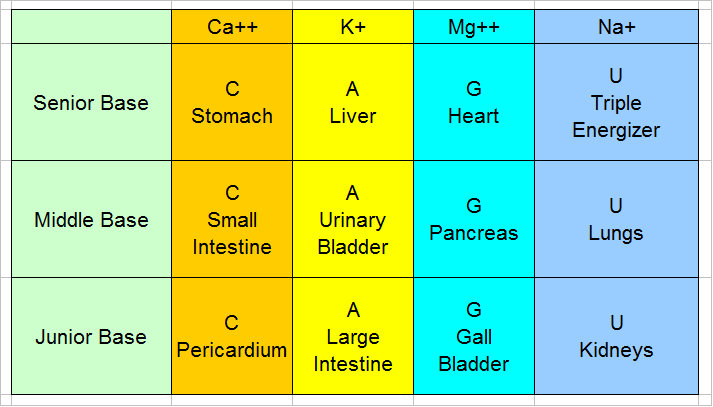 The activity time of the Pericardium is from 11 to 13 hours. It is understood that during the period of activity, the meridian is in a catabolic state, which corresponds to the predominance of Calcium, Sodium and Hydrogen ions. For the PC meridian, Hydrogen is the main catabolic ion.

The second step for us was to be the meridian of the Triple Energizer – TE (in TCM – Small intestine), the period of activity from 13 to 15 hours.

Since there is no other way of transferring energy, we will accept the assumption that the Small Intestine – SI is switched on between the Pericardium and the Triple Energizer – TE in the period from 12 to 14 hours, in order, on the one hand, to observe the rule of two-hour activity, and on the other hand, to distribute the activity time equally between the meridians, which are “stitched”.
Let’s build on the principle of “stitching” the daily circulation of energy movement.
The table shows three columns of meridians: 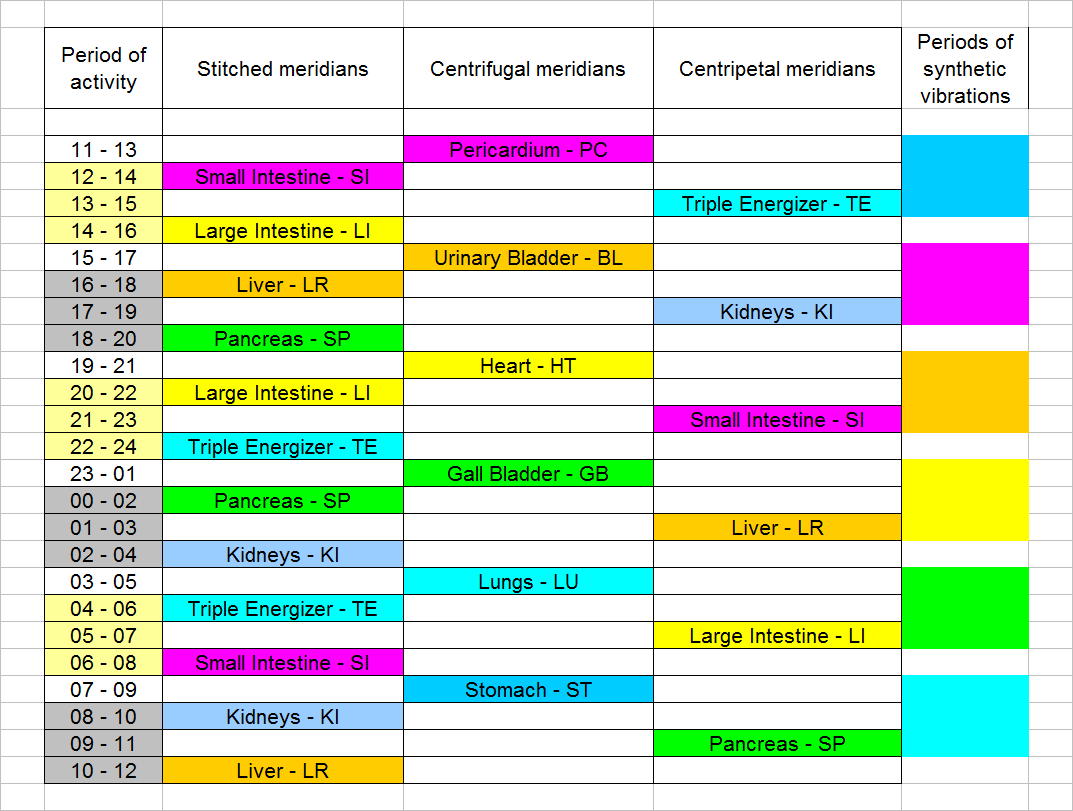 At the same time, the centripetal meridians actually organize regular oscillations of the dipole 3 times a day (they move the oscillation energy between the Yang vertice (organized by the meridians of the Small intestine (SI) – Triple Energizer (TE) – Large Intestine (LI)) and the Yin vertice (formed by the Kidneys (KI ) – Pancreas (PC) – Liver (LR) meridians) The day is split for 6 equal intervals of time where each 4 hours period is changing by Yin or Yang.

The given scheme allows a more accurate approach to the selection of the therapeutic effect, taking into account the metabolic phase and biorhythmic expediency.